The oldest Mulberry tree in England?

Last week, Jools of My English Country Garden wrote a post about her Mulberry tree, and it reminded me that not far from here we have what is reputed to be the oldest Mulberry tree in Britain. 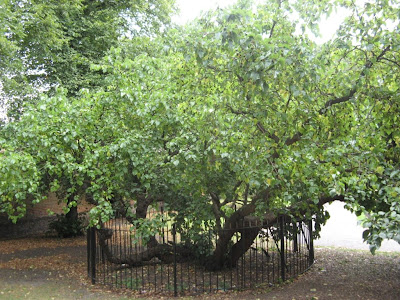 The thing I love about this area is how many large parks, heaths and woods there are close by - despite being in London we are literally surrounded by green areas. One of these, and the one which is home to the Mulberry tree, is Charlton Park.

The focal point of Charlton Park is Charlton House, a large Jacobean mansion built between 1607 and 1612 for Sir Adam Newton, the tutor of the eldest son of James I. (The boy died, leaving the throne to his younger brother Charles I). Up until the 1920s the house continued to be a private residence, but was then acquired by the local council to be turned into a community centre, while the land of the estate became three parks. 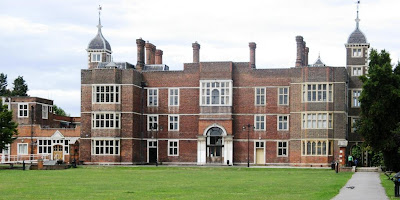 The Mulberry tree at the side of Charlton House dates back to 1608 and was planted on James I's orders. The King was keen that England should cash in on the silk industry, which was by then booming in other European countries such as Italy. The caterpillars which produce the silk feed on mulberry leaves and James therefore imported 10,000 saplings from Virginia, and "encouraged" his courtiers to plant them on their estates. Unfortunately for James, he'd not done his horticultural homework quite well enough - silkworms feed on the leaves of the White Mulberry (Morus alba) of China , and not the Black Mulberries (Morus nigra) of Virginia. Whoops.
So England ended up with 10,000 Mulberry trees - but sadly, no silk industry. One of the greatest gardening mistakes of all time?
And they are incredibly long lived. The Charlton House Mulberry is by no means the only tree surviving from that period. In fact, there is even one in Suffolk which claims to be older - but locally we tend to ignore that one. Undoubtedly an impostor.
The tree is still producing large quantities of fruit, and I don't think there are many people who walk past it in August without tasting. I remember that when I was a child, we'd always make a detour on our way to the local library, which is inside Charlton House, in order to pick whatever berries we could reach. 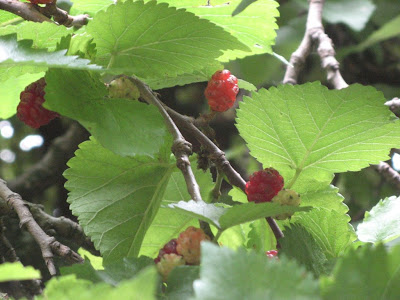 And if you want to know what it tastes like, you don't have to come to Charlton. There's a cultivar called Charlton House which you can get for your own garden... I wonder if I could grow one on the balcony? 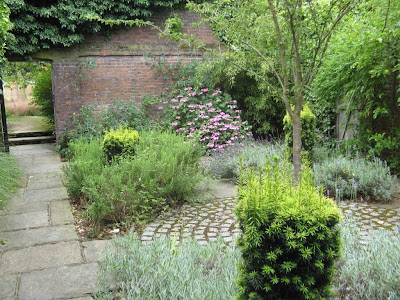 On the other side of the house from the Mulberry tree, and behind what used to be the stable block, are a series of walled gardens, each leading on to the next. What could there be beyond that door, I wonder? But it's late. They, I'm afraid, are going to have to wait for another post.

I didn't even realise you could eat mulberries, or that there were two kinds, so I've learned a lot from your post. And no, please don't even think about the balcony!

Thank you for showing Sue. Only till now do I know these are called mulberries :)

Look at at the old mulberry tree.... It looks so old and tired that the branches are beginning to rest on the ground... such a sight.
Thanks for sharing Sue,
~bangchik

whoa. I love that brick around the tree! I definitley need to take more note of gardens in Europe. My family loves mulberrys. We typically make pies every year from the mulberries that grow wild across the street. There's a great recipe for pie on my blog.