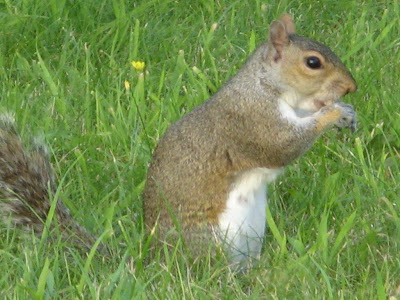 My garden in London backs on to a park which is maintained as a wildlife sanctuary, and much of the wildlife finds its way across the back fence into the garden - especially when it knows that there's food on offer. One of the most frequent visitors is a little grey squirrel.

Grey squirrels aren't native to Britain. They were first introduced in 1876, from America. But they bred rapidly and soon took over from the native red squirrels, once widespread. There are now estimated to be about 2.5 million greys as opposed to only 120,00 - 160,000 reds, which are mostly found in the coniferous forests of Scotland.

Why has the red squirrel declined so dramatically in numbers? Destruction of the woodlands which are the red squirrel's natural habitat is one reason. The grey squirrel has a number of advantages when competing for food. It can eat acorns, which the red squirrel can't, and which are often now the main food source in the parks and woodlands where the greys are found (I just wish they'd remember where they bury them - you can't imagine how many sapling oaks I pull out of my garden each time I'm here.) In addition, where hazel nuts (a principal food source for the reds) are growing, the greys have the advantage of being able to eat them when they are still unripe - which the reds can't. The greys therefore get there first, leaving fewer for the reds. 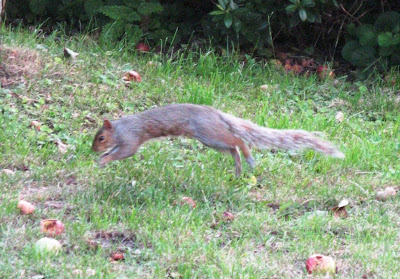 But one of the main reasons for the drop in numbers seems to have been a virus called the parapox virus. The greys are unaffected by it, but evidence suggests that they can and do carry and spread it. And for the reds, it's deadly.

It's estimated that red squirrels will disappear from and area within 15 years of the introduction of the greys and they are now a protected species, with projects to reintroduce them to their natural habitats being carried out in various places. One highly successful case was in Anglesey in North Wales, where culling the greys resulted in the re-establishment of a thriving population of reds. 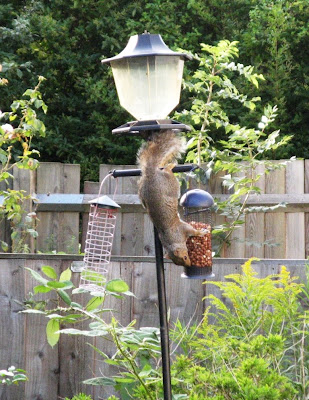 The greys, on the other hand, are seen as vermin and can be legally killed. Local DIY shops and gardening centres here are full of squirrel traps. You do need the permission of the landowner to set them however, so if any of my future tenants are reading this - you don't have it. If there is any control to be done, I feel it should be done in a planned way by the authorities, not by individuals. And in fact research is apparently being done to find an oral contraceptive which can be left where the greys will eat it but not other animals. Squirrels on the pill - the mind boggles. But a far more acceptable solution to my mind than people taking the problem into their own hands.

I like the squirrels though and wouldn't want to lose them from my garden. Yes, they can be a nuisance. They raid the bird feeders and the fruit trees, dig holes in the garden to bury their nuts and acorns, and dig up and eat the flower bulbs. (Yikes, I bought 200 daffodil bulbs to plant in the garden the other day - that should keep ours going for a couple of weeks.) And more seriously, they will eat birds eggs and baby birds. But they're fun to watch and brighten up the garden considerably. And they provide interest for our neighbours' cat, who is convinced that one of these days he'll be quick enough to catch one. Not a hope in hell. They just leap across the garden, whizz up a tree and sit at laugh at him. I swear I saw one throwing a nut down at him the other day ... 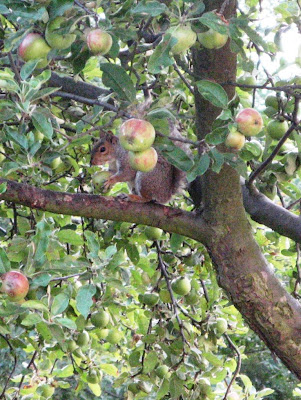 They're lovely to watch aren't they, and we used to enjoy their antics in the UK. We don't see them up here, although I'm sure there must be some... but we did once see a black squirrel rushing across the road in front of our car.

We have too many squirrels and they are tomato thieves as well as trying to raid the bird feeders. I think birth control is a clever idea!

Like you I have a love/hate relationship with squirrels. I hate the way they pig out on the bird food and then dig holes in the lawn or eat my plants. But I do love watching their acrobatics. Hours of entertainment.

It is a bummer that the reds are so susceptible to many more ills than the grays. Kind of really strange too since they are cousins. I guess that is what Darwin's survival of the fittest does for nature. Cute little buggers all but I'd as soon see them all go as stay. My dogs go 'nuts' around them.

I find them entertaining and exasperating in equal measure.Our cats have actually caught (and eaten) a few over the years.

Few and far between in Northern Ireland as fara as I can tell. I've seen 2 (albeit it RED) squirrels in my life in the forests. I adore them, so cute. Plus Squirrel (along with wibble and wobble) is my favourite word.

The Pill for gray squirrels sounds like a great idea! I have several grays in my garden and they are no trouble (except for their reforestation of oaks project, to which they devote great energy).

Good news--daffodil bulbs are poisonous, so you will not lose any! Hope you have a drill with special bit for planting 200. Photos in the spring, please!

It's sad to see the decline of animals. We don't have any squirrels where in our neighborhood...which is a good thing for some of my plants. However, when I lived in Austria, I missed our "friend" who used to bunk with our friends and he'd eat with us. He was such a delight.