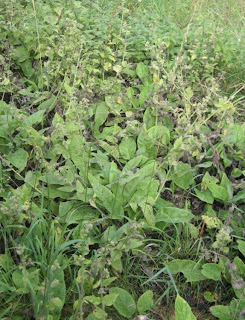 Never, never plant borage in your garden unless you can keep it in a container and be there to cut off all the flowers before they go to seed. Yes, I know I said that two years ago. But it's still there. Despite digging - I thought - every single root out of the garden when I was last here, it's back as if nothing had ever happened. It's in the flowerbeds, it's in the lawn, it's in the cracks in the paths ... Borage must be the most invasive plant in existence. 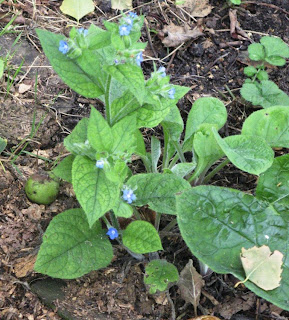 Needless to say, I didn't know that when I planted it about fiften years ago. It seemed such a pretty plant, with its broad green leaves and stems of blue, starry flowers. but since then it's been a constant battle which I know I'm not going to win until I can actually stay here for a year and deal with each plant one by one, and each seedling as it germinates, taking action at the first sign of sprouting leaves. 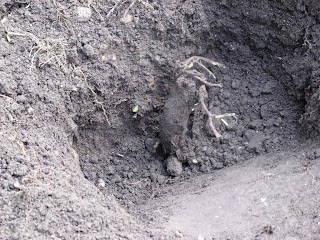 The problem is that digging doesn't help unless you can be sure of getting every single bit of the root. And it's almost impossible. Borage has huge taproots which will grow back if you leave even a bit in the soil. So I've tried another strategy this year. Despite the fact that I generally avoid chemicals, I sprayed with a systemic weedkiller to try and kill the plant before starting to dig.

That has meant a nail biting wait - and all the heavy work in the last weeks of the holiday(should that be "holiday"??). The weedkiller had a fairly evident effect on the leaves almost immediately - but I had to wait to give it time to work on the roots. And in the meantime I started to see the plants I'd missed - healthy green new leaves sprouting amidst the curled brown ones. So I had to go round those with more spray - and wait again. And then do a third round for the ones I'd missed both times. 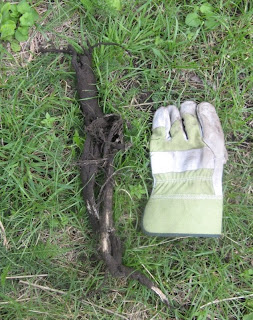 I think I've now got it all, and I'm starting the digging. I tackled a small bed in the back garden first - I thought if I could get a few of my daffodil bulbs in, it might spur me on a bit to a job I'm really not looking forward to. It's heavy work and I'm going to bed each night with pains in muscles I didn't know I had. There were relatively few plants in the small bed - but some of the roots were monsters, and they still filled an entire bucket. 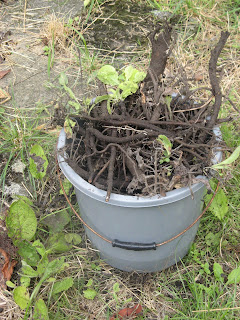 Did I get them all? I doubt it, but I'm just hoping that the weedkiller had had time to get down to the bits I missed. The bulbs went in and I'm now fighting the squirrel who keeps digging them up again. He doesn't seem to want to eat them, and in a comment on another post Daffodil Planter said they were poisonous. So I suspect he's just taking advantage of the soft earth to bury his acorns and hoicking my bulbs out of the way in the process. Anyone know any good squirrel repellent?

Back to the plot. The disadvantage of waiting so long is that I'm not going to be here when the seeds germinate in the nice earth I've prepared for them. Last time, by digging early I manage to hoe the new seedlings before I left. This year, though I may have dealt with the roots more effectively, I may even have created a worse problem. Ah well - come back in two years time. There will undoubtedly be a post in August 2011 which starts Never, never plant borage in your garden ....
Posted by Sue Swift at 8:20 am

I totally understand your predicament. For me it was the purple waffle plant. When it first appeared in my garden, I thought it was a god-send. Now, I don't seem to be able to get rid of it. It keep appearing again and again everywhere. Well, good luck in your 'war with borage'.

oh my!! keep it in a container for sure!

Weedkiller definitely has its place!

I love borage. Not only do the bees love it and we so need the bees, but also it makes a good liquid manure for the garden. Put all the plants you've pulled up into a bucket and cover with water. Let steep for a while and then use as liquid manure. It does pong a bit! And just to cheer you up borage can re-surface after fifteen years of not showing! Be warned! Val

Wow -- talk about persistent! Isn't it ironic how the things we're not so crazy about or things we wish we hadn't planted at all seem to take root and thrive, while something we baby and coddle and coax to new growth just shrivels and dies. Hmm, I think there's a lesson in there somewhere, though it escapes me now. ;)

I didn't know they were so invasive and hard to get rid of! Thanks for the forewarning!

It must be a very hardy plant as it grows wild here along the edges of roads and vineyards. It goes underground and survives months of drought in the summer. In spring it's beautiful, though. I love the flowers and so do the bees. Not sure I'd want it in a small garden, though!

Are you sure it is ordinary Borage (Borago officinalis)? I have Borage in my garden and it is an annual, very easy to pull up though it seeds well.
Could it be Green Alkanet (Pentaglottis sempervirensto) which is very invasive. Bees love it though that hardly compensates :-)

I have never had trouble with Borage taking over. Mostly it seems to self seed, but in California I think it doesn't get enough rain to make it a pest. Sorry about your trouble, it's such a lovely plant.

Oh, yuck! what a pest!! I do not have that problem with borage, but I do have the same horrendous challenge with some other plants. I have had to resort to using a little bit of chemicals. I'll think of you when I am out carefully dabbing herbicide, and pulling and digging my own pests. A sympathetic gardener here.

It looks and sounds like Brunnera Macrophylla, we have this in the garden and have the same problem. Try to dig it up and its back worse the next year as the parts of the rhizome split and form new clumps. The little blue flowers are quite nice in spring and it makes one feel a little callous digging it out while it looks so nice, but leave it too long and multiply your problem. Its probably a great plant if one is a lazy gardener as it gives fabulous ground cover.